Do you know where the world's largest chandelier is? The answer is a bank in the centre of London, England.

The round chandelier is 12 meters wide and has been recorded in the Guinness Book of Records. It has 15,000 LEDs and outputs 390,000 lumens. It has a total energy consumption of 2.7 kW. It weighs almost two tons. It looks an Annalok 543 bronze, and the bank. The wall panels blend into one. 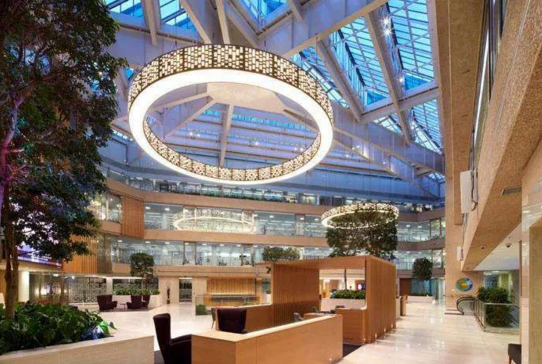 The luminaire was produced by Spectral at its parent company Ridi's Jungingen factory in Germany and designed by architect Sheppard Robson.

The contractor can only use a 4-meter hydraulic lift to send it to the air. The Spectral team built 30 separate 1.2-meter-long sections that were bolted together on site.

The chandelier is suspended on an existing beam and each beam is drilled with a diamond drill and fitted with a special heavy duty fixture. PCBs, LEDs, and power supplies are pre-installed with plugs and sockets.