Imagine, when it's dark, you can read through the glowing plants on your desk instead of turning on a light. What kind of experience is this? 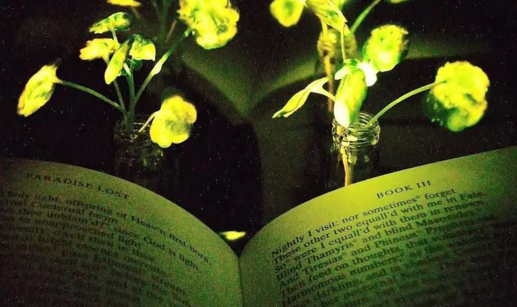 MIT engineers have taken a critical first step in achieving this vision. Engineers implanted special nanoparticles into the leaves of watercress and induced the watercress to gleam for nearly four hours. They believe that by further optimization, this luminescent plant will one day illuminate a workspace.

Michael Strano, a professor of chemical engineering at MIT and a senior author of the study, said that their idea was to make a plant that could be used as a desk lamp—without powering up, the light source ultimately coming from the crop itself. Energy Metabolism.

Researchers say the technology can also be used to provide low-intensity indoor lighting or to convert trees into self-contained circuit lights.

Stratano said that lighting accounts for about 20% of global energy consumption, and plants are able to repair themselves, have their own energy, and have adapted to the external environment. They believe that the time is ripe.

A new area of research pioneered by Strano Laboratories is Plant nanobionics, which aims to give plants new features by implanting different types of nanoparticles into plants. The team's goal is to transform plants to replace many of the features offered by electrical installations. Previously, researchers designed plants that could monitor explosives and communicate information to smartphones, as well as plants that monitor drought conditions.

The research team packaged the three components in different types of nanoparticle carriers. These nanoparticles are all made by the U.S. Food and Drug Administration as "usually considered safe" materials that help each ingredient reach the right part of the plant. Nanoparticles also prevent these components from reaching concentrations that may produce toxins to plants.

Researchers use silica nanoparticles with a diameter of about 10 nanometers to carry luciferase, and then use slightly larger polymer PLGA (polymers PLGA) and chitosan particles (chitosan) to carry fluorescein and coenzyme. A. In order for these particles to enter the plant leaves, the researchers first suspend the particles in solution, then soak the plants in solution, and then expose them to high pressure, allowing the particles to enter the leaves through tiny pores (stomata).

Previously, the manufacture of luminescent plants relied on genetically engineered plants, but this was a cumbersome process and the light emitted was very weak. Moreover, these studies were conducted on tobacco and Arabidopsis thaliana, which are commonly used in plant genetic research. However, the methods developed by the MIT research team can be applied to any type of plant. Currently, in addition to watercress, they have proven this with arugula, kale and spinach.

In the future, MIT hopes to develop a way to apply or spray nanoparticles onto plant leaves to turn trees and other large plants into light sources.

Strano said that they intend to carry out a technical treatment when the plant is a seedling or a mature plant, and continue to play a role throughout the plant's life cycle.