At the German Arctic Science Camp, researchers experimented with tomatoes, cucumbers, kohlrabi and other vegetables. At present, the camp has harvested 183 kilograms of fresh vegetables, including 29 kilograms of tomatoes and 1.6 kilograms of cucumber. This test not only partially addresses the demand for fresh vegetables by staff in the long winter camp, but also inspires the cultivation of vegetables in the African desert or the survival of humans on Mars in the future. 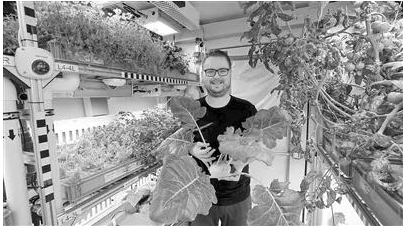 There is a long “separation phase” in the polar winter, the sea ice is too thick, and there is no supply boat to reach the camp. In the past, resident staff in the camps could only rely on stored vegetables and food. It is impossible to eat fresh vegetables.

At the beginning of February this year, the Arctic Science and Technology Camp of the German Aerospace Center used plant containers, substrates and nutrient solutions from the expedition ship to test the tomatoes in the container greenhouse. The outside is minus 42 ° C, but in a plant container placed in a 10 cm thick container, the tomatoes are growing stubbornly. Because there is almost no sunlight, the researchers used LED lighting.

Project manager Schubert said that although the tomatoes grown in the plant containers are not big, but the vitamin content exceeds the refrigerated vegetables, after all, it is fresh vegetables, which is already enjoyed by people who love salads. Moreover, pesticides are not needed to grow vegetables in the polar regions.

Schubert believes that the project may also be an example for future agriculture. More and more vegetable production worldwide will be transformed into vertical farms, which can optimize the city's ecological footprint, such as using wastewater from wastewater treatment plants to fertilize vegetables, or sending carbon dioxide-containing waste gas to greenhouse vegetable greenhouses.

Associated with this project is the exploration of human survival on Mars. In the future, humans will fly to Mars, whether on the road or after reaching Mars, during which they must grow their own fruits and vegetables.