At present, in the context of global economic fluctuations, the momentum of economic growth in Europe has continued to fall. The weakening of internal growth momentum, the financial risks of Italy, and the risk of Brexit in the UK have cast a shadow over the economy. The slowdown in external demand has definitely suppressed the export of Europe. In addition, the economic and trade negotiations in Europe and the United States and the geopolitical issues in the Middle East have increased the uncertainty of the economy. However, good inflation, falling unemployment, rising capacity utilization, etc., indicate that there is resilience in European economic growth, and maintaining a loose monetary policy is also conducive to maintaining economic growth. Considering the uncertainty of Sino-US trade friction and the negative impact of increased tariffs, the European market, which has relatively stable policies and lighting demand, has increasingly become the focus of lighting manufacturers.

Traditional products are accelerated and LED penetration is greatly improved

Although the growth rate of demand has slowed down, the awareness of energy conservation in Europe has been rising, accelerating the elimination process of traditional lighting products, and the penetration rate of LED lighting market has been greatly improved. Beginning September 1, 2018, the ban on halogen lamps is fully effective in EU countries under Act No. 244/2009, which was passed earlier. The elimination of halogen lamps will accelerate the development of LED lighting penetration, and the scale of the European LED lighting market continues to grow. In 2018, it reached 8.292 billion US dollars, with a year-on-year growth rate of 9.5%, and the penetration rate exceeded 50%. By 2019, the penetration rate is expected to reach 60%. 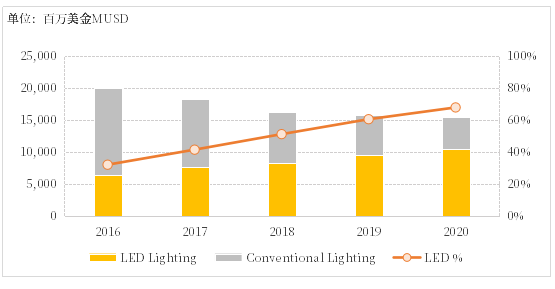